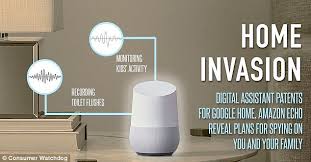 Owners of the company's products should understand that, if you own any device equipped with Amazon's Alexa - or "NSAlexa" - digital assistant, the e-commerce giant likely has access to some of your most private, intimate moments.

Earlier this year, the company was exposed for allowing thousands of employees to listen in on the private conversations of Echo speaker owners. Amazon's Alexa digital assistant is no better than a spy monitoring and recording users' conversations and reporting back to a team of dedicated handlers tasked with "improving" the product.

Anybody who isn't already in the know should get used to the idea that Alexa is eavesdropping on you. Anybody who doesn't believe us should take a look at the cache of recordings stored on their Echo devices.

Now, Bloomberg reports that another Amazon device, the Amazon "Cloud Cam", has been storing recorded footage and sending it back to the mothership to be reviewed by a squad of employees hoping to improve the company's "AI" technology.

According to BBG, the goal is to help the 'Cloud Cam's differentiate between a 'real threat' - like a home invader - and a false alarm (already, that's a lot of responsibility for an algorithm to handle).

Dozens of Amazon workers based in India and Romania review select clips captured by Cloud Cam, according to five people who have worked on the program or have direct knowledge of it. Those video snippets are then used to train the AI algorithms to do a better job distinguishing between a real threat (a home invader) and a false alarm (the cat jumping on the sofa).

During a typical day, Amazon's team of AI algorithm testers comb through up to 150 30-second clips, according to the anonymous sources who spoke with Bloomberg.

AI has made it possible to talk to your phone. It's helping investors predict shifts in market sentiment. But the technology is far from infallible. Cloud Cam sends out alerts when it's just paper rustling in a breeze. Apple Inc.'s Siri and Amazon's Alexa still occasionally mishear commands. One day, engineers may overcome these shortfalls, but for now AI needs human assistance. Lots of it.

At one point, on a typical day, some Amazon auditors were each annotating about 150 video recordings, which were  typically 20 to 30 seconds long, according to the people, who requested anonymity to talk about an internal program.

An Amazon spokeswoman said the clips are voluntarily submitted by users for "troubleshooting" purposes. Though there's nothing in the 'Cloud Cams' term and conditions informing users that these clips are shared with human workers, who use them to train their motion-detection software.

The clips sent for review come from employee testers, an Amazon spokeswoman said, as well as Cloud Cam owners who submit clips to troubleshoot such issues as inaccurate notifications and video quality. "We take privacy seriously and put Cloud Cam customers in control of their video clips," she said, adding that unless the clips are submitted for troubleshooting purposes, "only customers can view their clips."

Nowhere in the Cloud Cam user terms and conditions does Amazon explicitly tell customers that human beings are training the algorithms behind their motion detection software.