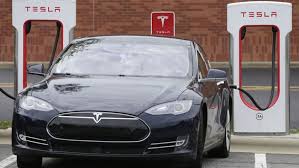 Pacific General & Electric (PG&E) is cutting power across large swaths of Northern California, including the Bay Area, in a drastic bid to prevent wildfires.

Now Tesla is warning people that before they settle into their outage outrage, they should really charge up their electric cars.

You see, electric cars are great options—except when there is no way to power them up. To be as proactive as PG&E, after hearing the news of the impending power cut, Tesla jumped into action, sending out an in-car alert to the dashboard display warning owners to charge their vehicles fully ahead of the outage.

As Electrek points out, most Tesla owners don't charge their vehicles to 100%, because it's a bit of a time suck, and the batteries last such a long time that it's not usually necessary—until the power company cuts the electricity, that is. Of course, Tesla just so happens to have another gadget that can help in the case of an emergency power outage—its PowerWall. Before the lights go out, Tesla is activating the "Storm Watch" feature on its PowerWall to store excess electricity before things go dark.

Don't worry about the folks at Tesla HQ, though. According to PG&E's outage map, they will be just fine as the company's offices fall right outside the outage zone.

for anyone wondering how tech companies are fairing in the california blackouts.... pic.twitter.com/5aihWC1zlo