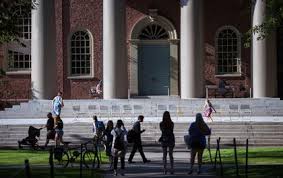 Harvard University can racially discriminate in admissions against Asian-Americans to achieve a more diverse student body. That's the startling essence of a federal judge's ruling Tuesday that turns the 1964 Civil Rights Act on its head and seems destined for the Supreme Court.

Harvard denies that it discriminates against Asian-Americans, or has any admissions quotas, implicit or otherwise. It says race is only one of many factors and, after examining the evidence, Judge Burroughs says this use of race is legal because diversity is a legitimate goal. The judge thus enshrines in law the opaque practices of many modern universities that make sure there aren't too many high-performing Asian-Americans on campus.

The lawsuit was brought on behalf of more than two dozen plaintiffs by Students for Fair Admissions, and one virtue of the suit is that it has exposed these hitherto secret admissions practices to public scrutiny. At the heart of the complaint is that the subjective "personal" ratings Asian-American applicants receive from Harvard are on average significantly lower than the ratings for Hispanic, black and white applicants.