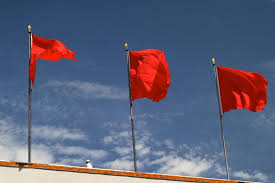 Gun-owners correctly perceive their Second Amendment rights to be balanced on the edge of a knife, awaiting the pressure to build again after the next well publicized shooting.

For gun-owners, the pattern is all too familiar: a mass shooting, such as those in El Paso and Dayton, followed by massive amounts of publicity by the anti-gun media and posturing politicians, accompanied by a demand that Congress "do something," such as red flag laws.  In response, gun-owners demand that their elected officials stand firm against the pressure, holding their collective breath, waiting to see how many of those members of Congress who promised to support gun rights in the months before the last election are willing to sacrifice those principles a year before the next election.

Senator Lindsey Graham (R-S.C.) promised that under his bill, to get a federal grant, the state red flag laws would have to provide "due process."  Similarly, President Trump has sought to assure the public that any red flag legislation will provide for "rapid due process."  When questioned, most congressional Republicans say they will support police seizing guns only if rigorous due process is provided.  Don't buy it.  Red flag laws violate the Second Amendment, and "due process" is not a magic wand to be waved to make the infringement go away.