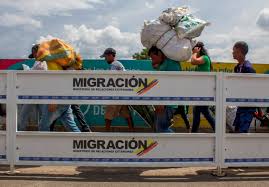 Merchants heading for the center of Venezuela hop on buses and load them with sacks of rice, boxes of medicine, cartons of toothpaste and even car tires that they bought in neighboring Colombia. On the arrivals side, exhausted travelers descend from buses and make their way toward the border, where they will shop for food or get their passports stamped to leave Venezuela for good.

Amid the screams of street vendors and the pedestrian mayhem, dozens of young men with metal carts hustle back and forth between the bus terminal and the border, carrying suitcases and merchandise. They are known as "lomo taxistas" — taxis of the lower back — because they spend much of the day hauling around heavy loads on their backs.

"I didn't expect to stay here, but I had to because I didn't have more money to continue my journey," said Ricardo Rocha, a lomo taxista from central Venezuela, who arrived in San Antonio last year.

Rocha said he makes around $8 a day hauling large sacks of goods around the San Antonio bus terminal, which is about four blocks from the border. It can be backbreaking work in extreme temperatures that often climb to 40 degrees Celsius (104 Fahrenheit), but the 26-year-old says itis better than staying in his home state of Aragua.