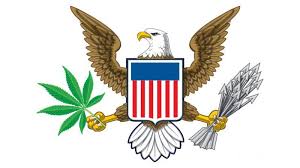 This vote is "a hopeful sign that the harmful policies of marijuana prohibition will soon be a relic of the past."

The House of Representatives in June resoundingly approved a spending rider that would bar the Justice Department from interfering with the implementation of state laws that allow the production, distribution, and consumption of marijuana for medical or recreational use. The amendment, a broader version of a rider that has protected state medical marijuana programs since 2014, was supported by 62 percent of the legislators who voted, including 41 Republicans and 226 Democrats.

"This is without a doubt the biggest victory for federal cannabis policy reform to date," Aaron Smith, executive director of the National Cannabis Industry Association, said in a press release. He called it "a hopeful sign that the harmful policies of marijuana prohibition will soon be a relic of the past."

The amendment, introduced by Rep. Earl Blumenauer (D–Ore.), says "none of the funds made available by this Act to the Department of Justice may be used" to "prevent" states from "implementing their own laws that authorize the use, distribution, possession, or cultivation of marijuana." It applies to the District of Columbia, the Northern Mariana Islands, Guam, Puerto Rico, and the U.S. Virgin Islands as well as the 47 states that have legalized some form of cannabis for medical or recreational use.

Rep. Robert Aderholt (R–Ala.) spoke against the rider. "Under the Controlled Substances Act," he noted, "the Drug Enforcement Administration defines Schedule I drugs as having no current acceptable medical use and a high potential for abuse."

Rebutting Aderholt, Blumenauer argued that marijuana's Schedule I status cannot be rationally justified. "If we were rescheduling drugs today, cannabis probably wouldn't be scheduled at all," he said. "It is widely known now that there are, in fact, medicinal purposes to be obtained from using cannabis. That is why [legislators] in the gentleman's own state just approved medical marijuana. They are not goofy. They are not misled. They understand that there is compelling evidence."