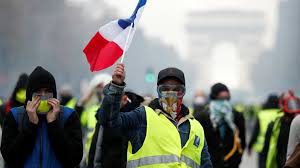 Some 1,800 people took to the streets of the city on Saturday, September 14, according to police figures (usually half the actual numbers). This week, the Yellow Vests tried a different approach to the protests, avoiding the city's center and hitting different routes instead.

Although most of the ethno-nationalist French workers marched peacefully, there were around 400 people from the so-called 'black block' attacking and damaging various venues, including a local McDonald's, smashing bus stops and setting dumpsters on fire. At least two protesters and four police cops were injured in the scuffles.

Tension is high and the French workers are deadly serious. Ahead of the rally, the police seized an entire crate of Molotov cocktails. These bottles, filled with kerosene or similar inflammatory, can be lethal.