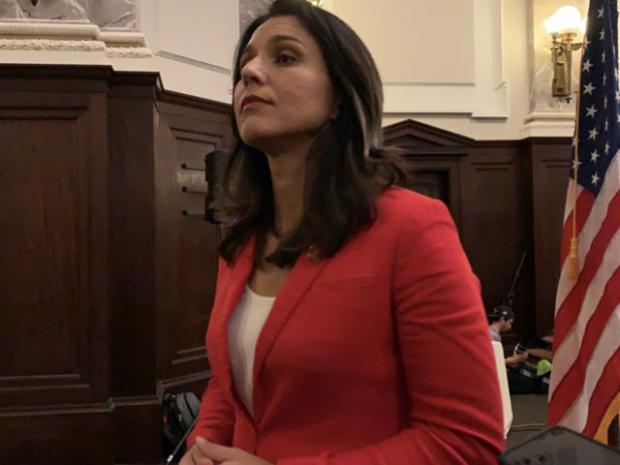 Gabbard was responding to President Trump's statements about a potential U.S. response to a recent attack by Houthi rebels on oilfields in Saudi Arabia that threatened global oil supplies and the security of a key American ally.

Yesterday President Trump offered to place our military, my brothers and sisters in uniform, under the command [sic] of Prince Mohammed bin Salman, the dictator of the Islamist Kingdom of Saudi Arabia [sic]. Trump said, "[We] are locked and loaded, but are waiting to hear from the Kingdom as to who they believe was the cause of this attack, and under what terms we would proceed!" Mr. President, as you know, I have never engaged in hateful rhetoric against you [sic], or your family, and I never will, but your offering our military assets to the dictator of Saudi Arabia to use as he sees fit, is a betrayal of my brothers and sisters in uniform who are ready to give our lives for our country, not for the Islamist dictator of Saudi Arabia. For you to think that you can pimp out our proud servicemen and women to the Prince of Saudi Arabia is disgraceful, and it once again shows that you are unfit to serve as our commander in chief. As a member of Congress, and as a soldier, I and all of my brothers and sisters in uniform have taken an oath to protect and defend the American people and the Constitution of the United States of America.

1 Comments in Response to Tulsi Gabbard to Trump: 'We Are Not Your Prostitutes. You Are Not Our Pimp'

Take a look at the contract you sign when you join the military. Sure, it has to do with upholding the Constitution and protecting the country. But it also has to do with doing these things by following the orders of your superiors and the President. If you don't think that you can follow orders given by a dictator, don't join. Or resign. Do you think that you have better intel for protecting the country than your superiors and the President do?