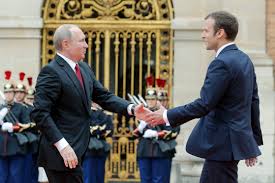 In a series of statements— "Russia is deeply European"  (Aug. 20), "We need partnership with Russia to build a new architecture of trust and security in Europe" (Aug. 27), "It's time for Europe to reach out to Russia" (Aug. 27), "Pushing Russia further into isolation would be a profound error by Europe" (Aug. 29), "Time has come to ease tensions with Russia" (Sept. 9), and so on.

What's going on here?  Milder statements by President Trump brought him charges that he was a "Putin agent" and a multi-year "Russiagate" investigation that aimed at Trump's impeachment. Yet here is Washington's vassal brown-nosing up to Putin.  What is the point of this if not to soften up Putin for Russian concessions to Washington's foreign policy as the price of being accepted by the West or to put Putin off guard for a coming attack on Iran?

I regard Putin as the only leader the world has, but I am sometimes puzzled by him.  Iran, an ally of Russia, is being set up by Israel, Washington and Saudi Arabia for military attack, and Putin offers to sell Saudi Arabia the Russian S-300 and S-400 air defense system!  Does Putin wish to arm Saudi Arabia, Israel, and the US against Iranian retaliation?