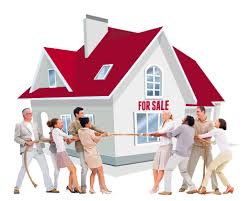 The report found that the national bidding-war rate in August was 10.4%, down from 42% a year earlier. The rate printed at the lowest level since 2011.

At the start of 2018, the national bidding-war rate was 59%, then plunged as homebuyers became uncomfortable with sky-high housing prices, increasing mortgage rates, and economic uncertainty surrounding the trade war. The housing market started to cool in late 2018, as the competition among homebuyers collapsed by 4Q18, this is an ominous sign for the national housing market that could soon face a steep correction in price.

Even with eight months of declining mortgage rates in 2019, bidding-wars among homebuyers continue to drop. This is somewhat troubling because the government's narrative has been declining rates will boom housing, but as of Wednesday, mortgage applications continue to fall. Homebuyers aren't coming off the sidelines, and there's too much uncertainty surrounding the economy with recession risks at the highest levels in more than a decade.