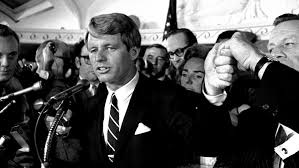 Robert F Kennedy Jr is accusing Thane Eugene Cesar of murdering his father, claiming he fatally shot the presidential hopeful from behind in 1968

RFK Jr said Sirhan fired once in Kennedy's direction and then into the crowd, while Cesar then the fatal bullet as the senator from NY fell to the floor

There are others who believe there were two gunmen that night, a theory that was bolstered when the coroner determined Kennedy was shot from behind

RFK Jr made this claim just hours after Cesar passed away in the Philippines, where he moved shortly after the assassination, and called for a new probe

'The LAPD unit that investigated my dad's assassination was run by active CIA operatives. They destroyed thousands of pieces of evidence,' claimed RFK Jr