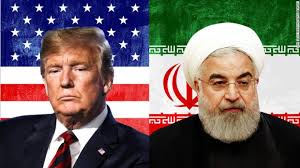 WTI crude was sliding after mixed inventory data, but accelerated the losses, breaking below yesterday's lows, after headlines suggesting Bolton was fired after disagreeing with Trump's desire to ease Iran sanctions to get a meeting with Rouhani.

As Bloomberg reports, President Trump discussed easing sanctions on Iran to help secure a meeting with Iranian President Hassan Rouhani later this month, prompting now former National Security Advisor John Bolton to erupt, and "argue forcefully" against such a step, according to the report.

More notably, there already was support for de-escalation of sanctions with Iran, because during the Monday Oval Office meeting, Treasury Secretary Steven Mnuchin voiced his support for the move as a way to restart negotiations with Iran, the Bloomberg sources said. At this point, Bolton exploded.