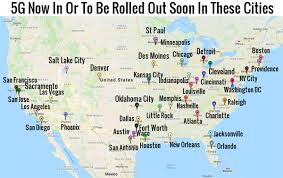 (Natural News) Ultra-high speed 5G is being rolled out all across the country, despite serious reservations about its potential impact on people's health. If you're wondering if this unwelcome development is coming to a city near you, All News Pipeline has created a map that shows all the places where 5G has already been installed or will be in the near future.

Not surprisingly, major cities like Los Angeles and New York City appear on the list, but what's really disconcerting is the sheer number of cities that are marked as either having 5G now or getting it soon.

In the western part of the country, cities like San Francisco, Sacramento, San Diego, San Jose, Phoenix and Las Vegas are all on the map, while eastern cities with 5G include Boston, Washington D.C., Orlando, Jacksonville, Charlotte, Providence and Raleigh. In the middle of the country, cities like Denver, Salt Lake City, Kansas City, Des Moines, Oklahoma City, Austin, Dallas, San Antonio, Little Rock, Memphis and Indianapolis all have the dubious distinction of being 5G cities.

It's a pretty long list for something that has already been shown to be dangerous to human health in the very few studies that are available. Some of the problems it's being linked to include various types of cancer, mass wildlife die-offs including animals as well as plants, heart problems, Alzheimer's, diabetes, headaches, and DNA damage to humans, animals and plants alike.