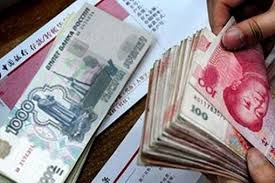 While the US under president Trump continues to avoid international entanglements and shun legacy ties with foreign allies - for better or worse - America's challengers in the global arena are taking advantage of the void left by the deep state's involuntary retraction from international affairs, and none more so than China and Russia, which with every passing day are preparing for that inevitable day when the dollar is no longer the world's reserve currency.

As the SCMP reports, China and Russia are accelerating their reduction in reliance on the US dollar, with the Russian Ministry of Finance expected to launch its first yuan-denominated bond by the end of this year or in early 2020. Moscow is hoping that a yuan bond will lift interest by Chinese investors in Russian assets and it would also help to create benchmarks for the setting up of hedging options for roubles and yuan, sidestepping the use of the US dollar.

According to the SCMP, the investment-grade bond would be the first-ever Russian sovereign debt issue in yuan, and it is expected to be listed on the Moscow Stock Exchange. The idea was first proposed in 2016, although there have been several delays in putting the deal together. It was revived last year with China and Russia seeking to further strengthen ties amid escalating tensions with the United States.

"Currently, several banks led by Gazprombank and [China International Capital Corporation] are making efforts to realize this first yuan bond, [but] there are still some technical details we are working on," said Cheng Daming, executive director at the China International Capital Corporation, one of China's leading investment banks. "With some push, and joint efforts, we do believe we will realize this deal within the year or the beginning of next year."