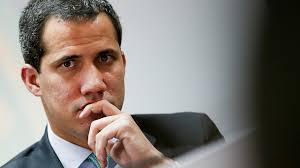 Venezuelan prosecutors said Friday they would charge opposition leader Juan Guaido with "high treason" for planning to renounce the country's claim to a disputed border area controlled by Guyana.

Guaido, the National Assembly speaker who is recognized as president by more than 50 countries, is being investigated for negotiating to renounce "the historical claim our country has on the territory of Esequibo," Attorney General Tarek William Saab told reporters.

Speaking on Venezuelan state TV, Tarek William Saab said Guaido is suspected of negotiating over the disputed Essequibo region with Guyana in exchange for foreign support.

Guaido "participated in illegal negotiations, behind the back of the country, meant to withdraw Venezuela's historical claim on the Esequibo territory, in exchange for political support from the United Kingdom for a nonexistent presidency in charge," Saab said.