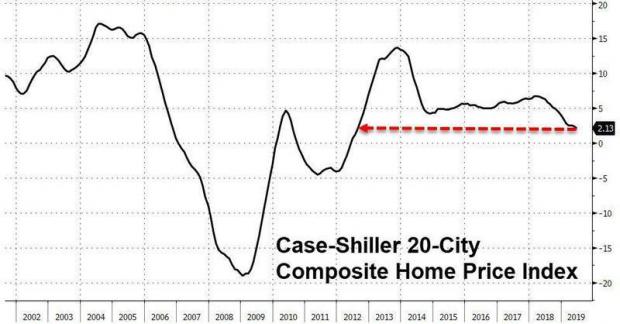 Almost 40 weeks of declining mortgage rates haven't led to a jump in housing market activity in the US, but rather a decline in home price growth across the country, as per data published via S&P CoreLogic Case-Shiller's 20-City Composite price index on Tuesday.

Here are Fitch's top three ideas for why lower interest rates are probably not going to spark an increase in housing activity in 2H19: lack of new housing supply for first-time homebuyers and others who want a new build; mortgage lenders unable to handle the capacity due to cutbacks made in anticipation of 2019 being a sluggish year; and most borrowers refinanced in 2016 when rates were at the same levels as they were today.

Fitch estimates housing starts could rise by 1% this year, with new home sales expected to increase by 2% YoY.

Existing home sales are expected to "decline modestly" this year, mostly due to the lack of inventory for starter homes.

Fitch says builders have responded to the inventory shortfall by constructing new affordable homes to keep up with demand, while more expensive homes are seeing accelerated price cuts.

Some of the homebuilders Fitch monitors have already shifted to building more affordable homes, the ones who did saw net orders improve.