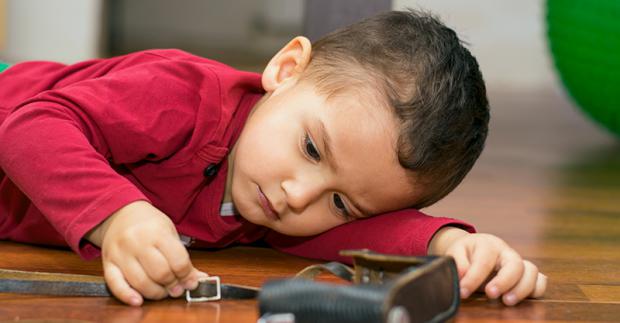 When the Centers for Disease Control and Prevention (CDC) released its biannual overview of autism prevalence in early 2018, it reported that one in fifty-nine 8-year-olds (born in 2006) had an autism spectrum disorder (ASD). This represented a 15% increase from the rate of one in sixty-eight described in the CDC's 2016 and 2014 reports (for 8-year-olds born in 2004 and 2002, respectively). A federal snapshot of 3 through 17 year-olds in 2016 reported diagnosed autism in one in thirty-six children—23% more than in 2014.

Despite the two-year jump in ASD prevalence, the CDC cast a positive spin on its 2018 findings. Recognizing that white ASD prevalence had been higher, in the past, than prevalence among other race/ethnicity groups, the agency hypothesized that "white ASD prevalence had largely stabilized" and praised the 15% increased prevalence as a reflection of "the catch-up of Hispanics and blacks who had been historically underascertained." The media readily acquiesced to this worn-out narrative, implying that latent autism cases had simply been waiting to be discovered through more effective outreach and better screening. According to PBS, "[I]f it's the case that the rate grew only because of better diagnosis, that would mean that autism spectrum disorder isn't becoming more common among American children. Doctors are just better at spotting it."

Dissatisfied with the "better diagnosis" explanation, University of Colorado researcher Cynthia Nevison wrote of a 1000-fold increase in autism prevalence since the 1930s and a 25-fold increase since the 1970s in a December 2018 publication in the Journal of Autism and Developmental Disorders. Now, Nevison and Rutgers researcher Walter Zahorodny—who regularly contributes New Jersey data to the biannual CDC reports—have published a new study critiquing the "catch-up" hypothesis. Their analysis further undermines officials' complacent narrative by highlighting upward ASD trends among black and Hispanic children above and beyond mere "catch-up"—as well as pointing to worsening racial/ethnic disparities.

…ASD [Autism Spectrum Disorder] prevalence also increased continuously among Hispanic children and, beginning in birth year 2007, grew faster than the other races in the clear majority of states.

The two researchers used the two best datasets available to assess time trends in race-specific United States autism prevalence. The first came from 18 years of annual reports collected for the Individuals with Disabilities Education Act (IDEA), which has tracked special education recipients (ages 3-21) since the early 1990s, with breakdowns by race/ethnicity available for 3-5 year-olds; the most recent IDEA data are for 3 to 5 year-olds born in 2012–2014. The researchers compiled the second dataset across eight biannual Autism and Developmental Disabilities Monitoring (ADDM) Network reports; the ADDM Network is the ongoing CDC surveillance system that reports every two years on ASD prevalence in children born 12 years previously.

After a year of careful data analysis, the researchers ascertained several interesting trends among 3 to 5 year-olds in the IDEA dataset:

Among white children, ASD rates plateaued in the mid-2000s after 15 years of sharp increase; around birth year 2007, however, white ASD prevalence "resumed its climb" in many states. 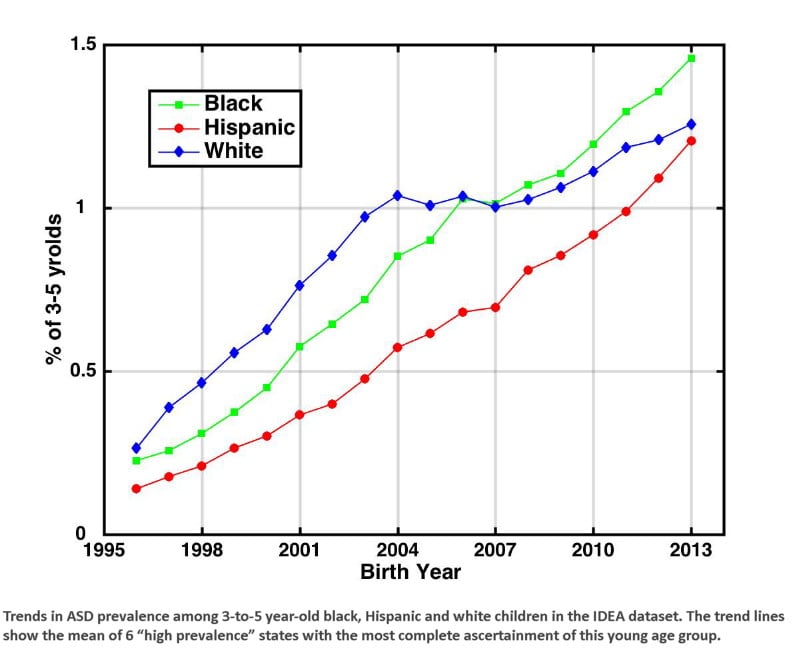 ADDM data from nine states for birth years 2002–2006 showed mixed trends for white children, depending on the state, but for both black and Hispanic children, ASD prevalence increased in six out of nine states. However, Georgia was the sole state where the trends fully supported the CDC hypothesis of a stabilized white ASD prevalence and black and Hispanic "catch-up."

Discussing the plateau in white ASD prevalence in the mid-2000s, the two researchers point out that it could "suggest a stabilization of the environmental drivers of ASD…followed by a new or increasing environmental insult after 2007." They also mention a recent study in California that analyzed the issue of the white ASD plateau in greater depth, using stringent data from the California Department of Developmental Services (CDDS). While that study confirmed a slowdown in ASD prevalence among privately insured (i.e., higher income) white children, the researchers found that ASD rates among publicly insured (i.e., lower income) whites actually continued to increase strongly and steadily through the 2000s. Over the same decade, ASD prevalence for black children also increased strongly—irrespective of type of insurance—and ended up exceeding white prevalence by almost 40%. These provocative results suggest that higher-income white parents may have some insights into ASD prevention.