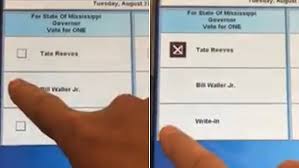 The clip was shared to Facebook on Tuesday by Oxford resident Sally Kate Walker, and shows a male voter trying to cast his ballot by selecting from two available options on a touch screen.

The man touches a box marked 'Bill Waller Jr' - the candidate for whom he is voting to be the state's next Republican governor.

However, once he selects his option, the machine inadvertently marks a box labelled 'Tate Reeves' - the other candidate in the running to be Mississippi governor.

'Nope,' the voter says, as he tries to touch the 'Bill Waller Jr.' box again.

The machine malfunctions for a second time, and again selects Tate Reeves as the man's vote of choice.

'How is this happening?' a woman can be heard saying in the background.

The man continues to try to vote for Bill Waller Jr. by selecting the appropriately marked box on the touch screen.

He presses his preferred option 14 times, but each time the electronic machine still selects Tate Reeves.

'It is not letting me vote for who I want to vote for!' the frustrated man exclaims.