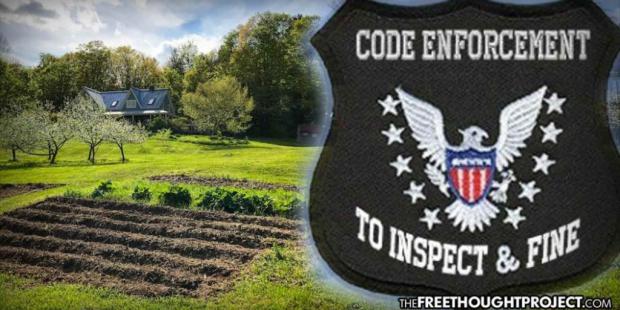 Joshua Killeen, a U.S. Army veteran, entrepreneur and homesteader, thought he'd done his research when searching for a state in which to build his homestead. The vision was to open a sustainable homestead to be used as a wellness retreat featuring classes on how to homestead and health and wellness clinics such as yoga, with his wife is an instructor. In 2016, he chose Arizona and settled in Yavapai County where he bought 10 acres. That's when he says the nightmare began.

Less than two years after purchasing the property, a Yavapai County code enforcer named Jacob Lane blocked the entrance to Killeen's farm. He told the budding homesteader he was guilty of breaking several building codes and if he didn't come into compliance he'd have to pay a $7,500 fine.

Lane gave Killeen a hearing date to meet with the County. But after showing up to the hearing, Killeen said he was pressured into signing an affidavit saying he was guilty of violating multiple county codes or face the $7,500 initial fine as well as $500 per day per violation until the land was "returned to vacant land."

To Killeen, the violations seemed much ado about nothing. There was a fence, a few outbuildings, and a tiny home in which he and his wife lived. We asked Killeen why he didn't just go ahead and secure the building permits for the structures and he said the county simply wasn't doing it's job to ensure the permits were issued in a timely manner. So after waiting months on a septic tank permit, for example, the Army veteran had enough. He went ahead and used his land the way he wanted to—you know, like all Americans did before municipal codes were invented to control how people use their own land.

Killeen said not only was he taking it from Yavapai County officials but was giving it back as well. He threatened to turn in the county to the federal government for corruption because of the pace of their permitting was unacceptable in his mind. After threatening to get the feds involved, Yavapai County quickly gave him his septic permit.

Wanting to use his land the way he wanted to use it, Killeen said he preemptively started advertising his retreat on Facebook. The county, he said, had a fit over it and actually printed off pages from his Facebook account and brought them to the hearing. Killeen agreed to remove the advertisements but thought it odd the county would actually stalk his page to uncover dirt to be used in a "conditional use" permit hearing.

The army intelligence veteran soon realized he was not alone in being what seemed like a target for county officials to go after code violators. A retired couple in their 80's is currently facing foreclosure after being fined $9,300 in code violations. Those violations now have gone to debt collectors. They say they don't have the money to pay the fines and are being forced to sell their homestead over an incomplete home renovation (which originally had been permitted), and a few outbuildings on their land. The couple says the code enforcers violated the law by coming onto their property to take pictures.

Lind Storebo bought her property in 2016, and paid cash for it only to find out she too would be a target of intimidation and harassment by Yavapai County code enforcers. Like Killeen, Storebo was also asked to attend a hearing with the county. She said Yavapai County official David Williams was screaming at her, hurling profanity, spitting in her face as he did, and threatened to have her arrested if she didn't sign the affidavit for allegedly violating county codes when she put a camper on her land. Storebo was afraid of going to jail, and instead of fighting, simply vacated the land by removing the buildings and the camper. She now has land she paid cash for and cannot use.

Killeen says the ordeals could all have been avoided had the county respected the landowners' rights to do with their land as they wish. He says the fees for permitting and land studies are staggering. He's already paid out $11,000 in permit fees to the county. Killeen and his wife are determined to see their dreams come true at any cost but can't keep wondering why the county simply doesn't give individuals who want to live a more traditional homesteading way of life a pass on frivolous fees.

It seems in the land of the free, even if you pay cash for your multi-acre homestead, want to install a clean septic system and live a sustainable life, you cannot. If you do you'll be extorted by your local government for attempting to do so, threatened with going to jail, and harassed until you comply.