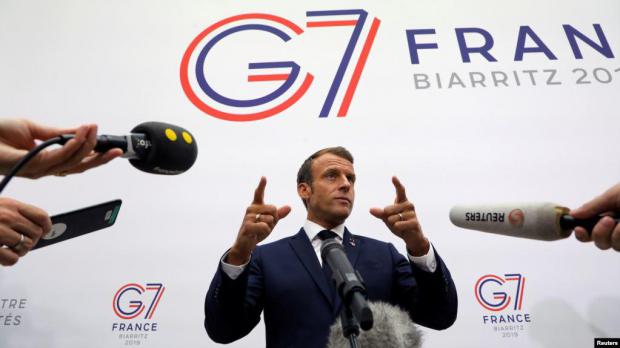 Though he had been due in Asia for a scheduled tour to bolster support for relief from US sanctions, Iranian Foreign Minister Javad Zarif's plane made a surprise landing in Biarritz on Sunday, where the Group of Seven (G7) summit is in session.

Amid speculation over the plane's unscheduled return to France, Iran's foreign ministry has now confirmed FM Zarif has arrived in Biarritz for talks at the French foreign ministry's invitation. However, "There won't be any meeting or talks with the American delegation," the statement said.

The Iranian delegation plans to hold meetings on the sideline of the G7 summit, western diplomatic sources have also said. French President Emmanuel Macron will reportedly be involved in the sideline meetings, after he told reporters at the summit he plans to continue holding talks with Tehran in the coming weeks over Iran's nuclear program. Reports suggest Macron could press Trump for a resumption of the Iran oil waiver program.

He and Zarif discussed moving forward just days ago in Paris. It also must be remembered that Zarif is currently under US Treasury department sanctions, and further it was recently revealed that last month Zarif had rebuffed a secret invitation to meet with President Trump in the oval office, which involved the mediation of Rand Paul.