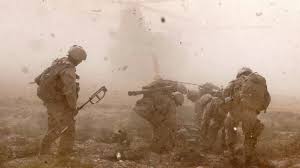 Friday, President Donald Trump met in New Jersey with his national security advisers and envoy Zalmay Khalilzad, who is negotiating with the Taliban to bring about peace, and a U.S. withdrawal from America's longest war.

U.S. troops have been fighting in Afghanistan since 2001, in a war that has cost 2,400 American lives.

Following the meeting, Trump tweeted, "Many on the opposite sides of this 19 year war, and us, are looking to make a deal — if possible!"

Some, however, want no deal; they are fighting for absolute power. Saturday, a wedding in Kabul with a thousand guests was hit by a suicide bomber who, igniting his vest, massacred 63 people and wounded 200 in one of the greatest atrocities of the war. ISIS claimed responsibility.

Monday, 10 bombs exploded in restaurants and public squares in the eastern city of Jalalabad, wounding 66.