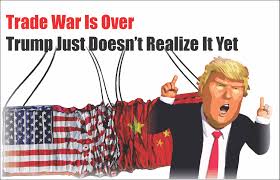 Authored by Lance Roberts via RealInvestmentAdvice.com,

On Tuesday, the markets bid higher following a statement from the U.S. Trade Representative's office that tariffs will commence on September 1st, but that some products will be delayed until December 15th. To wit:

"…some tariffs will take effect on Sept. 1 as planned, 'certain products are being removed from the tariff list based on health, safety, national security and other factors and will not face additional tariffs of 10 percent. Further, as part of USTR's public comment and hearing process, it was determined that the tariff should be delayed to December 15 for certain articles."

The only part the algos heard was "tariffs delayed," which sent them into stock panic buying mode.

However, stocks crashed again on Wednesday as the yield curve inverted, sending "recession fears"through the markets.

Of course, since President Trump has pegged the success of his Presidency on the rise and fall of the markets, on Wednesday, as "tweets" about a "trade talks continuing" failed to lift the markets, he resorted to more direct measures to manipulate the markets: Via CNBC:

"Trump held the call with J.P. Morgan Chase CEO Jamie Dimon, Bank of America's Brian Moynihan and Citigroup's Michael Corbat, according to people with knowledge of the situation."

This, of course, was reminiscent of the call made by Steve Mnuchin, U.S. Treasury Secretary, during the market rout last December. But most importantly, this is about the upcoming election:

"Trump has been reaching out to corporate leaders this week amid his concerns that a slowing U.S. economy could impact his reelection chances, according to a Thursday piece from the Washington Post."

Hopefully, he will listen to them.

But even if the trade dispute was ended today, the damage is likely already done.

-Tax cuts are fully absorbed into the economy

-Interest rates are signaling there is something "broken"

-Yield curves are negative as "deflationary" pressures are rising

-All of which is leading to rising recession risk.

In other words, while investors have hung their portfolios hopes of a "trade deal," it may well be too little, too late.

1 Comments in Response to The "Trade War" Is Over, Trump Just Doesn't Realize It Yet!

For example. Do Americans know how to make cars? YES! Why don't Americans make most of their own cars? Two reasons. Cheap, un-import-taxed labor overseas. Income tax doesn't let people afford American-made cars. --- A 1000+% import tax on cars would bring in enough money so that we wouldn't need income taxes, so we could afford the cars we would make to fill the demand for foreign cars we couldn't afford any longer. Also, less income tax would trash the FED Ponzi system which allows Government borrowing based on potential tax returns. Smaller Government = more money into the private sector so that the FED and their banks could stay alive.