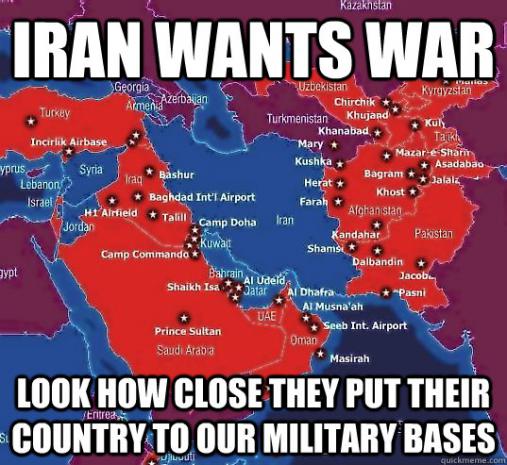 A somewhat weird report published at Oilprice.com claims that Russia will station troops, ships and fighter jets in Iran. The piece was reproduced at Yahoo.com and Zerohedge even as it is obviously bonkers.

In a potentially catastrophic escalation of tensions in the Persian Gulf, Russia plans to use Iran's ports in Bandar-e-Bushehr and Chabahar as forward military bases for warships and nuclear submarines, guarded by hundreds of Special Forces troops under the guise of 'military advisers', and an airbase near Bandar-e-Bushehr as a hub for 35 Sukhoi Su-57 fighter planes OilPrice.com has exclusively been told by senior sources close to the Iranian regime. The next round of joint military exercises in the Indian Ocean and the Strait of Hormuz will mark the onset of this in-situ military expansion in Iran, as the Russian ships involved will be allowed by Iran to use the facilities in Bandar-e-Bushehr and Chabahar. Depending on the practical strength of domestic and international reaction to this, these ships and Spetsntaz will remain in place and will be expanded in numbers over the next 50 years.

1. The Persian Gulf is a lake with an average(!) depth of less than 50 meter. It is a place where one might use small and nimble midget submarines. But no one serious will put a nuclear submarines there.

2. Sukhoi Su-57 fighter planes have yet to be build. Those currently flying are test planes which still lack the required new engines. Russia recently ordered the first batch of Su-57 but the first deliveries will only be in 2022-24. 35 of these planes may be available in a decade or  so. When they are they protect mother Russia from NATO and not some Iranian oil wells.

3. Spetsnaz (not Spetsntaz) are expensively trained special forces. They do not do guard duty for bases.

4. Iran's constitution (pdf) does not allow the stationing of foreign troops. Article 146 is pretty clear about that:

The establishment of any kind of foreign military base in Iran, even for peaceful purposes, is forbidden.

In August 2016 the Russian and Iranian military agreed to to set up a logistic base in Hamedan, Iran, for the Su-22M3 bombers used over Syria. A few days after the deployment became publicly known the agreement was shunned:

On 22 August, Tehran called a halt to the military cooperation and barred the Russians from using its bases. One reason for this surprising turn of events is the political tussle in Iran where Defence Minister Brigadier General Hossein Dehghan was accused of 'disrespecting parliament' and of violating the country's constitution.

5. The "next round of joint military exercises" between Iran and Russia in the Indian Ocean and the Strait of Hormuz will be the very first one. It required a special agreement. That is why it made news:

"Earlier, we signed an agreement [on joint exercises] with Russia's Armed Forces and the Russian Fleet's command. Soon the preparations and maneuvers' planning will start and they will be carried out this year," Khanzadi was quoted by the Fars news agency as saying.
...
In late July, the Iranian Navy commander paid a visit to Russia. He told the IRNA news agency that Russian-Iranian drills could soon be held in the northern part of the Indian Ocean, including in the Strait of Hormuz.

An "expert on Iran-Russia relations" remarked:

Iranian media are reporting that #Iran and #Russia have signed a military cooperation agreement.

The details of the agreement aren't public but this is the first time such an agreement has been concluded by the two countries.

It is the "first time such an agreement" was signed only when one ignores the Joint Military Cooperation Agreement between Russia and Iran signed in January 2015 as well as the one found in August 2017. The new agreement is only the first in that it regulates joint exercises.

It seems that "experts" working for western think tanks and random authors with mysterious "senior sources close to the Iranian regime" are not the best informed people when it comes to Iran.