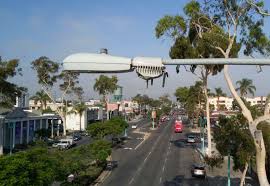 Hernandez was booked into jail on suspicion of murder, but the investigation from last August would take an unexpected turn.

"Obviously, with any of these investigations there's a great deal of follow-up to do, but it seemed pretty straightforward at that time," said Sgt. Louis Maggi with the San Diego Police Department homicide unit.

The next day, police investigators went out to 5th Avenue and Market Street, where witnesses said a vicious fight had led to the killing. Officers canvassed the area for video of the incident when they noticed a camera built into a streetlamp at the intersection.

San Diego has installed thousands of microphones and cameras in so-called smart streetlamps in recent years as part of a program to assess traffic and parking patterns throughout the city.

The technology over the last year caught the attention of law enforcement last year. When police officers picked up Hernandez last summer, they had never used a streetlamp camera in an investigation.