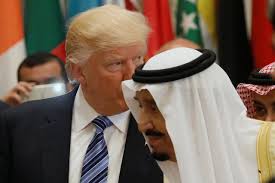 The Pentagon is deploying troops to Saudi Arabia in order to defend the U.S. and its allies from "credible threats." It is important to note that there are already U.S. troops inside Saudi Arabia, contrary to official reports. U.S. troop levels inside Saudi Arabia have fluctuated since Operation Desert Shield in 1990, but have never reached zero. The Saudi regime understands that the presence of Western troops is a sensitive matter with the Saudi public, so the House of Saud and the Pentagon together pretend there is no permanent U.S. military presence within the kingdom. Corporate media go along with the deception.

U.S. war corporations have maintained a more open presence in the kingdom. The Saudi regime is one of the biggest customers of the U.S. war industry. Executives, field service representatives, maintenance personnel, and instructors from Boeing, Lockheed Martin, Northrop Grumman, and other corporations rotate through the kingdom regularly. Most major war corporations have offices in Riyadh. Raytheon's Raytheon Saudi Arabia is the gold standard, helping the Saudis build up their own industrial capacity. From Lockheed Martin helicopters to General Dynamics bombs, the products of U.S. war corporations have been on display murdering thousands in the Saudi-led, U.S.-backed war against Yemen. U.S. war corporations such as DynCorp, Northrop Grumman, and Rockwell Collins have been instrumental in training the Saudi National Guard, which protects the House of Saud and crushes pro-democracy protests whenever they crop up.