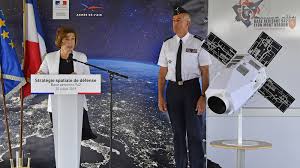 Months after President Donald Trump announced the creation of the U.S. Space Force, France is beginning to lay the groundwork for its own version.

French President Emmanuel Macron announced last month that the nation's air force will establish a space command for the purpose of national defense, particularly to protect of French satellites.

First, the country will launch next-generation Syracuse satellites equipped with cameras that will be able to identify threats in space, such as anti-satellite weapons.