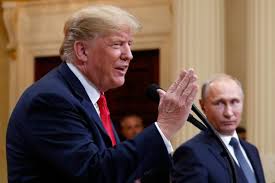 Russian President Vladimir Putin sat down on June 19, 2019, in the Kremlin, for an on the record interview with Oliver Stone. The Russian government has released a transcript of the interview.

Below is Putin's discussion with Stone about the 2016 presidential election.

Oliver Stone: Yes. So recently, you know Russia has been obviously accused and accused over and over again of interference in the 2016 election. As far as I know there is no proof, it has not turned up. But now in the US there has been an investigation going on about Ukraine's interference in the election. It seems that it was a very confusing situation, and Poroshenko seems to have been very strongly pro-Clinton, anti-Trump.

Vladimir Putin: Yes, this is no secret.

Oliver Stone: Do you think there was interference?

Vladimir Putin: I do not think that this could be interpreted as interference by Ukraine. But it is perfectly obvious that Ukrainian oligarchs gave money to Trump's opponents. I do not know whether they did this by themselves or with the knowledge of the authorities.