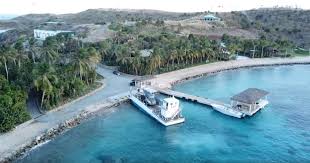 Epstein was arrested last weekend on charges of sex trafficking of minors.

A cube shaped building known as the 'temple', which once had a golden dome on top of it before Hurricane Irma knocked it off in 2017, appears to be under renovation and has two striped mattresses inside it.

According to James Both, the wooden door on the structure "appeared to be designed to keep people in, rather than keeping people out".

Speculation is also raging as to whether an underground facility was built below the temple.