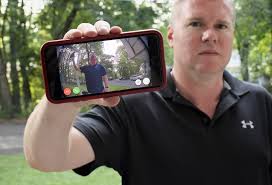 The woodsy community of Wolcott, Connecticut, doesn't see a lot of crime. But when the police chief heard about an opportunity to distribute doorbell cameras to some homes, he didn't hesitate.

The police who keep watch over the town of 16,000 raffled off free cameras in a partnership with the camera manufacturer. So far, the devices have encountered more bears than criminals, but Chief Ed Stephens is still a fan. "Anything that helps keep the town safe, I'm going to do it," he said.

But as more police agencies join with the company known as Ring, the partnerships are raising privacy concerns. Critics complain that the systems turn neighborhoods into places of constant surveillance and create suspicion that falls heavier on minorities. Police say the cameras can serve as a digital neighborhood watch.

Critics also say Ring, a subsidiary of Amazon, appears to be marketing its cameras by stirring up fear of crime at a time when it's decreasing. Amazon's promotional videos show people lurking around homes, and the company recently posted a job opening for a managing news editor to "deliver breaking crime news alerts to our neighbors."

"Amazon is profiting off of fear," said Chris Gilliard, an English professor at Michigan's Macomb Community College and a prominent critic of Ring and other technology that he says can reinforce race barriers. Part of the strategy seems to be selling the cameras "where the fear of crime is more real than the actual existence of crime."