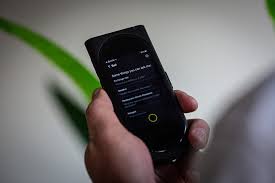 Surely, I told our esteemed editor, a review of a travel-ready translation device would require me to take a holiday somewhere sunny and foreign where I could get by on nothing but my masculine wiles, charm and futuristic talking box. "Can it translate "nice try," do you reckon?" was his response.

Yes. Yes, it can. The Langogo Genesis device can translate all sorts of things into all sorts of languages, and it does so using clever neural machine translation tech that models and works on entire sentences at once to try to understand and relate the context of what you're talking about.

The Genesis is about as thick as my Google Pixel 3 XL smartphone, but significantly shorter and thinner, as well as much lighter. It's small enough that you wouldn't think twice about throwing it in your travel bag, or your pocket. It's got Wi-Fi connections as well as a SIM card slot, and the included SIM (which wasn't included for our review unit) comes pre-loaded with a year's worth of mobile data you can use in more than 70 countries. That data can be used for live translations, of course, or you can set the Genesis up to act as a Wi-Fi hotspot and run your other devices off it. Neat!