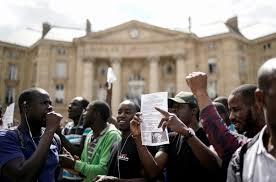 Undocumented migrants calling themselves the 'Black Vest' protesters flooded the Pantheon in Paris and demanded the right to remain in France. The protesters vowed to remain on site until all of the illegals get proper papers.

Some 200-300 undocumented migrants stormed the Pantheon – a popular tourist site and mausoleum – where the most renowned French national heroes, such as Voltaire or Victor Hugo, are buried.

The majority of the protesters, who call themselves 'Black Vests' – in an analogy with the Yellow Vests movement – are believed to be migrants of West African origin.

"We are paperless, voiceless, faceless for the French Republic. We come to the graves of your great men to denounce your disrespect," one of the protest organizers said in a statement ahead of the event.

"We will remain here until the last one of us has been given documents," a leaflet given out by an organiser read.