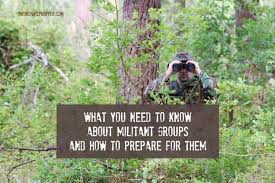 When the 'Big One' happens, whether that's defined as the mother of all earthquakes, a massive volcano, a nuclear war, EMP, World War III, the next Revolution, or an invasion of the country, the Rule of Law will be threatened. The Rule of Law, loosely defined, is summed up as 'individuals, persons and government shall submit to, obey and be regulated by law, and not arbitrary action by an individual or a group of individuals.' Obviously, without Rule of Law, anything goes.

That's when various peoples step into action with an agenda, and sometimes nefarious goals. For a plethora of reasons, these people already exist and are already grouped up, unified, and practicing. This is not a joke, nor is it meant to be political.

There are things you should know about militant groups.

This information is not to scare you, but to inform you so you can be prepared and react accordingly.

A few years ago I was a member of a militant group. Unfortunately, I joined the group when they were going through a rough period, with some dissidents of the group revolting internally. But during my time with the militia, I was made Team Leader over two Tennessee counties, and I reported to the State Coordinator who in turn reported to State and National Leaders. Underneath me were an Assistant Team Leader, Intel, Comms, Engineering, Medical, and Security Leads, and of course members. All was well and good, and I loved the job. We checked in every day – every single member – and organized monthly meetings where we had cookouts, range training, CPR Certification, and First Aid training, canning and food preserving presentations, etc. I loved every minute of it. It was a family of like-minded people all sharing what they knew to help others.

Then I started getting phone calls and multiple group texts containing internal gossip regarding the behavior of the State Leader. I'm not one to listen to gossip all that often. I hear it, file it away to examine later if I need to, and move on. However, at the same time, I was seeing/hearing weird behavior from the State Leader. He was giving orders military style, which seemed appropriate – after all, we were a militia and many members were prior military – but the orders were a bit confusing and his moods were all over the map. One minute the order would be to take a team and 'Adopt a Highway' with the name of the militia as the Adopter, (in order to get the name of the militia out there to the public as a benign supportive group), then in the next breath he was explaining how every member needed camo uniforms and gear and AR-15s.

"I want you to take a fully equipped and armed team to each home in your neighborhood, introduce yourselves as the "(militia name here)" and make sure they have food, water, and know how to reach you in case of an emergency. They need to know that You will be the Rule of Law in your area."

The State Leader had become a "Wildcard".

A 'Wildcard' in most LEO or Military circles means unpredictable and therefore unreliable. All that day I received group texts and phone calls.  The militia had split, taking at least half the members with it, and the splinter group wanted me to come to their side. Gossip and stories ran back and forth with He Said and She Said flying everywhere… Who does one trust? I promptly left the militia. I realized I didn't really know anyone other than what they had chosen to show and tell me. I told the State Leader I was leaving, I told the leader of the splinter group I was leaving, then I deleted all numbers and blocked all calls and thanked God no one had been to my house or had my address.

There is a minimum of hundreds of active militias all across the United States, but not all of them are bad.

Small Space Prepping: How to Store Lots of Supplies in a Little Home or Apartment

Infojamming the Jab As We Kick Off Derrick Brozes Activation Tour

Last-Minute Hurricane Prep Round-Up: These Resources Will Help You Get Ready