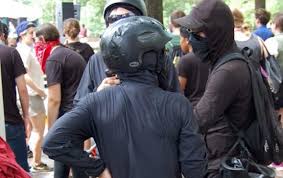 There's a list of "rules" for media covering their antics, which we now know include destroying property and clubbing journalists.

Washington's Pennsylvania Avenue saw two competing protests near the White House on Saturday—a Proud Boys' "Demand Free Speech"  rally, and a left-wing counter-protest organized by #AllOutDC which promoted the immediate expulsion of all accused Nazis, Alt-Right, and White Supremacists from the nation's capital.

I slipped into the latter protest and took some close-up photos of black-drabbed Antifa activists gathered there to ostensibly lend a hand. After I posted a few photos online,  I saw a copy of the notice that AllOutDC organizers distributed warning the media not to photograph the faces of the left-wing demonstrators without "their explicit, stated consent."

Mea Culpa! At least I didn't violate the first rule of furtive photography: make sure the durn flash does not inadvertently go off.  (I also took quirky photos of the right-wing rally, including an unusual number of pro-Roger Stone t-shirts and a "Bikers for Trump" dude holding a giant "End the Bolshevik Media Monopoly" sign, but I saw no micro-managing of the media there.) INSURRECTION: BLM Mob Swarms D.C. Streets, Chants 'If We Don't Get It, Burn It Down'

How D.C. and its teachers, with shifting plans and demands, failed to reopen schools