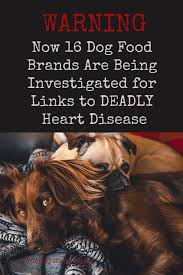 We recently reported that several expensive brands of dog food could potentially cause heart disease in your furry friends. Now, other brands have come to light for possibly increasing the risk of dilated cardiomyopathy (DCM) in dogs.

The FDA's investigation has found several common factors in the implicated pet foods:

In July 2018, the FDA announced that it had begun investigating reports of canine dilated cardiomyopathy (DCM) in dogs eating certain pet foods, many labeled as "grain-free," which contained a high proportion of peas, lentils, other legume seeds (pulses), and/or potatoes in various forms (whole, flour, protein, etc.) as main ingredients (listed within the first 10 ingredients in the ingredient list, before vitamins and minerals). Many of these case reports included breeds of dogs not previously known to have a genetic predisposition to the disease. The FDA's Center for Veterinary Medicine (CVM) and the Veterinary Laboratory Investigation and Response Network (Vet-LIRN), a collaboration of government and veterinary diagnostic laboratories, continue to investigate this potential association. Based on the data collected and analyzed thus far, the agency believes that the potential association between diet and DCM in dogs is a complex scientific issue that may involve multiple factors.

We understand the concern that pet owners have about these reports: the illnesses can be severe, even fatal, and many cases report eating "grain-free" labeled pet food. The FDA is using a range of science-based investigative tools as it strives to learn more about this emergence of DCM and its potential link to certain diets or ingredients.

Following an update in February 2019 that covered investigative activities through November 30, 2018, this is the FDA's third public report on the status of this investigation. (source)

Many contained legumes, seeds, and potatoes

Many contained peas and lentils

So even if those ingredients have previously been deemed safe for dogs, you may want to avoid them.

The brands and the potentially linked deaths

Below, find the brands that were most commonly named in the DCM report along with the number of canine deaths.

It's important to note that most of these are extremely high-quality, expensive pet foods, going for as much as $80 a bag. The ingredients are wholesome – but, they may not be good for dogs.

Between 2014 and 2018, 524 cases of canine DCM and 9 of feline DCM were reported to the FDA. Out of those pets, 119 died of the heart disease.  The FDA hasn't asked for companies to recall the pet foods, but has suggested that the companies "make informed decisions about the marketing and formulation of their products."

Moving Sheep with My Dog Millie

THE ZOONOTIC THREAT: Into the Smart Cities With You! The "Biodiversity" Lie & Agenda 2030

Jim Mellon predicts the end of animal and dairy farming

Why Are Large Numbers Of Birds Suddenly Dropping Dead In Multiple U.S. States?