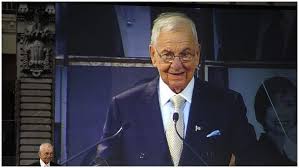 Lido Anthony Iacocca, the automobile industry legend best known as "Lee," died at the age of 94 on Tuesday morning, his family confirmed.

A child of Italian immigrants who grow up in humble conditions, Iacocca became one of the most powerful — and best known — executives in Detroit.

Iacocca rose to become president of Ford Motor in December 1970.

After being fired in a dispute with company heir Henry Ford II, Iacocca joined the then-struggling Chrysler. Using both his business skills and ability to turn a phrase, he won federal loan guarantees that helped the automaker avoid a potential 1980 bankruptcy.

If you can find a better car, buy it.

TV tagline when he was chairman of Chrysler

During his career, Iacocca become closely associated with at least three iconic vehicles. He has been widely credited as the father of the Ford Mustang, as well as the K-Car that helped Chrysler pull out of its financial slump. Working with former Ford colleague Hal Sperlich who joined him at Chrysler, Iacocca also gave the go-ahead to the minivans that for a number of years were the most profitable products offered by the third-largest of the Detroit automakers.

"Lee was one of few truly great leaders," said Bob Lutz, a longtime executive at Ford and Chrysler who worked closely with Iacocca. "He was my mentor, my teacher and role model. When he was on, he was fabulous. I will miss him."

"I owe the second half of my career to Lee Iacocca," Lutz said. "All in all, we had a relationship like a father and son."

In his latter years with Chrysler, Iacocca spent an increasing share of his time doing charitable work, among other things spearheading efforts to restore both the Statue of Liberty and Ellis Island, the immigration port in New York Harbor where his own parents came into the United States.

Iacocca became famous not only as Chrysler's chairman and CEO but its TV pitchman, where he made famous the tag line, "If you can find a better car, buy it."

But after being nudged out by the Chrysler board, Iacocca unexpectedly teamed with billionaire Kirk Kerkorian in a failed 1995 hostile takeover attempt.

The company and its former chairman patched things up a decade later, with Iacocca again serving as a Chrysler pitchman, in one TV commercial appearing with rapper Snoop Dogg.