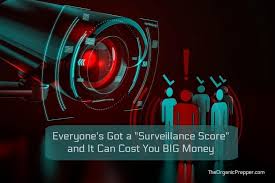 In these Orwellian times, when it is revealed that yet another government agency is spying on us in yet another way, most of us aren't one bit surprised. Being surveilled nearly everywhere we go (and even in our own homes) has become the norm, unfortunately.

Yesterday, it was revealed that the NSA improperly collected Americans' call and text logs in November 2017 and in February and October 2018 – just months after the agency claimed it was going to delete the 620 million-plus call detail records it already had stockpiled.

But this article isn't about that.

It is about something far more insidious.

When it comes to spying on people, the government has competition.

The Chinese government is currently implementing a social credit system to monitor its 1.3 billion citizens (China already has 200 million public surveillance cameras). Facial recognition technology and personal data from cell phones and digital transactions are being used to collect intimate details about people's lives, including their purchasing habits and whom they socialize with.

The gathered data is used to create mandatory social credit ratings for every citizen. These ratings will score citizens' "general worthiness" and provide those with higher scores opportunities like access to jobs, loans, and travel. Those with lower scores will not have access to those opportunities.

While the United States government has yet to implement such a system, companies in the country are, reports The Hill:

Consumer advocates are pushing regulators to investigate what they paint as a shadowy online practice where retailers use consumer information collected by data brokers to decide how much to charge individual customers or the quality of service they'll offer.

#REPRESENT, a public interest group run by the Consumer Education Foundation in California, filed a complaint with the Federal Trade Commission (FTC) on Monday asking the agency to investigate what the group is calling "surveillance scoring" of customers' financial status or creditworthiness. (source)

Companies are using Secret Surveillance Scores to evaluate you.

The opening paragraphs of the 38-page complaint are chilling:

Major American corporations, including online and retail businesses, employers and landlords are using Secret Surveillance Scores to charge some people higher prices for the same product than others, to provide some people with better customer services than others, to deny some consumers the right to purchase services or buy or return products while allowing others to do so and even to deny people housing and jobs.

The Secret Surveillance Scores are generated by a shadowy group of privacy-busting firms that operate in dark recesses of the American marketplace. They collect thousands or even tens of thousands of intimate details of each person's life – enough information, it is thought, to literally predetermine a person's behavior – either directly or through data brokers. Then, in what is euphemistically referred to as "data analytics," the firms' engineers write software algorithms that instruct computers to parse a person's data trail and develop a digital "mug shot." Eventually, that individual profile is reduced to a number – the score – and transmitted to corporate clients looking for ways to take advantage of, or even avoid, the consumer. The scoring system is automatic and instantaneous. None of this is disclosed to the consumer: the existence of the algorithm, the application of the Surveillance Score or even that they have become the victim of a technological scheme that just a few years ago would appear only in a dystopian science fiction novel. (source)

These scores are used to discriminate based on income.

Written by lawyers Laura Antonini, the policy director of the Consumer Education Foundation, and Harvey Rosenfield, who leads the foundation, the complaint highlights four areas in which companies are using surveillance scoring: pricing, customer service, fraud prevention, and housing and employment.