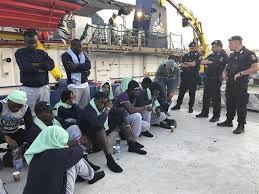 The 40 migrants onboard disembarked after 16 days on the Sea Watch 3, operated by German NGO Sea-Watch and operating under the Dutch flag.

Captain Carola Rackete, 31, docked just before 2 a.m. - ramming a border-control vessel trying to stop them in the process. Rackete was arrested on charges of "resisting a war ship," which carries a penalty of up to 10 years in prison.

Sea Wach spokeswoman Giorgia Linardi said that the situation was still "unfolding," and that the charges had yet to be formalized. She added that the migrants had been taken to a migration center on the island.

The Sea Watch, which rescued 53 people off the coast of Libya on June 12, had navigated toward Italy after rejecting an offer to dock in Tripoli, Libya, which humanitarian groups do not deem safe. Thirteen migrants had been allowed to disembark in Italy for medical reasons after the rescue. -New York Times