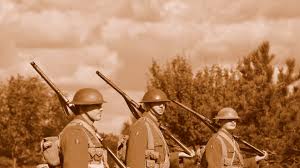 What, sir, is the use of a militia? It is to prevent the establishment of a standing army, the bane of liberty. …Whenever Governments mean to invade the rights and liberties of the people, they always attempt to destroy the militia, in order to raise an army upon their ruins.

All too often, government-produced defense is discussed as an ideal—a force that protects people and their rights. Seldom does reality enter the picture. Standing armies, after all, often do not only practice defense.

Once established, a government's military, its bureaucrats and leaders, as well as laymen all face a different set of incentives. Those with a job related to the military have an incentive to keep their job. In most cases, they probably also desire to see the scope of their power expanded and their pay increased. The support for war, then, is the ideal policy for achieving those goals. These incentives may not transform a champion of peace into a war-loving bureaucrat, but they can have effects on the margins. It's much easier to rationalize a war if your job depends on it.