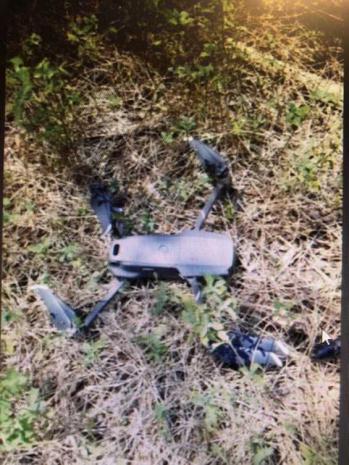 Not only are the cartels weaponizing mass migration to tie down our border agents so they can bring in dangerous people and contraband, they are apparently monitoring the migrant flow in real time with spy drones.

A border agent in the Rio Grande Valley sector informed me that Border Patrol recovered a cartel drone on Sunday that crashed in La Grulla, Texas, near the river. "In the afternoon on June 9, 2019, Border Patrol agents were 'sign-cutting' a group of illegals south of the town of La Grulla, TX, when they encountered a drone laying in the brush," said the veteran Texas agent, who must remain anonymous because he is not authorized to speak to the press. "The lights on the drone were blacked out with electrical tape, so as to not be seen at night.  This area has recently seen an influx of illicit trafficking."

DHS officials have publicly said for over a year that the cartels are using the mass influx of family units to get in dangerous people away from the agents, but the use of drones further accentuates the point that this is much more of a strategic invasion than just an immigration issue. "The cartel is investing in technology to guide groups to a stash house or to a 'load driver' waiting to pick them up," said the agent, who feels that he and his colleagues are being outmaneuvered by the dangerous insurgent groups operating on both sides of the border.

"First, they started giving the illegals smart phones equipped with land navigation apps and map overlays, along with battery chargers and a compass. This cut out the need for a 'guide.' Now, with the use of drones, the cartel can see us for miles. They can direct the groups of illegals away from agents and have the load driver go to them or choose a different stash house. They were already at an advantage with the amount of U.S. citizen [smuggling scouts]. Now they can direct movement from above in a 360-degree view and pinpoint accuracy, even in the thick brush or dense sugar cane. There is nowhere an agent can approach the group without being seen."

Today, we would like to introduce you to the next dimension of 3D-printed freedom - drones.

Buckle Up! They Want To Drone You!