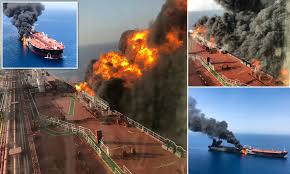 THE US said tonight that Iran was behind the "torpedo attack" on an American-linked oil tanker in the Gulf of Oman.

Both the Front Altair and the Panama-flagged Kokuka Courageous - which was reportedly bombed - burst into flames and were forced to evacuate in the troubled region this morning.

What we know so far:

It's "highly likely Iran caused the attacks," one US official has claimed

Iran's foreign minister has branded the explosions as "suspicious"

And now, in comments bound to ignite tensions between the two countries, US Secretary of State Mike Pompeo blamed Iran for the "blatant" attacks.

He said they were part of a "campaign" of "escalating tension" by Iran and a threat to international peace and security.

"It is the assessment of the United States government that the Islamic Republic of Iran is responsible for the attacks that occurred in the Gulf of Oman today," Pompeo told reporters.