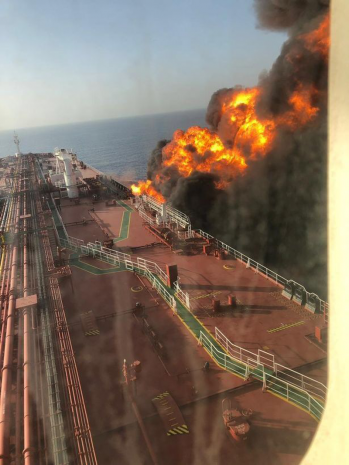 Update 3: Managers at the companies that own the tankers have weighed in on Thursday's attacks. The manager of the Kokuka Courageous described the incident as a "hostile attack," and DHT Holdings and Heidmar, the owners of the two tankers, have suspended new bookings to the Gulf.

Update 2: It appears earlier reports that the Front Altair had sunk were, in fact, incorrect. The ship's captain has said that it is still afloat. VHF radio traffic confirmed that it is damaged but still afloat.

Hours have passed since the suspected attacks, and still nobody has claimed responsibility. Iran's Foreign Minister Javad Zarif has noted how suspicious it is that a Japanese owned vessel would be attacked while Iranian leaders were meeting with the Japanese prime minister in Tehran.

Reported attacks on Japan-related tankers occurred while PM @AbeShinzo was meeting with Ayatollah @khamenei_ir for extensive and friendly talks.

Suspicious doesn't begin to describe what likely transpired this morning.

And as one BBG analyst pointed out: "Fingers will certainly be pointed at Iran as the mastermind behind these events. But the potential benefits to the Persian Gulf nation are outweighed by the risks. And even if Tehran isn't responsible, it will still suffer the consequences."

Several American warships were nearby when the attack unfolded, per radio traffic, which also showed some signs of tensions with Iranian vessels: "American warship identifying itself as 'Coalition Warship' stating they have multiple vessels and aircraft in the vicinity. Iranian Navy calling vessels asking their intention in the area."