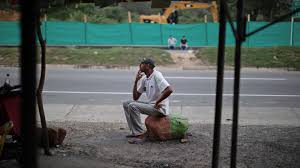 According to a new report by the UN Refugee Agency and the International Organization for Migration, the pace at which citizens are leaving the country has been "staggering", rising from 695,000 people in 2015 to over 1 million people since November 2018.

The countries surrounding Venezuela have been forced to put regulatory measures in place to stop the flow of migrants, which will soon be the largest in Latin American history, according to Bloomberg. Should the exodus continue, it could surpass the 6.3 million refugees created by the Syrian civil war.

Over 12 countries met last year to address the flow of migrants that is putting pressure on resources and stoking tensions in the region. A universal policy for dealing with the problem has yet to be enacted and, on Thursday, Peru said it would increase controls later this month by requiring Venezuelans to apply for humanitarian visas before crossing the border.

Colombia remains the primary destination for those leaving Venezuela, and it now hosts 1.3 million people who have fled the country. Peru hosts 768,000; Chile 288,000; Ecuador 263,000; Brazil 168,000 and Argentina 130,000. Mexico, Central America and the Caribbean have also seen an influx of Venezuelan migrants.