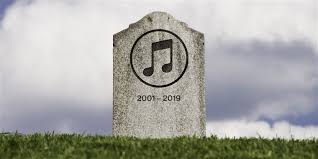 Or, as one dramatic Forbes writer put it: "With one swift stroke, like a samurai warrior felling a worthy opponent, [Apple's Craig Federighi] ended iTunes." (Just take a sabbatical and write that YA novel you've always wanted to, David.)

Apple's (AAPL) opening keynote at the developer's conference, WWDC, marked an end to what was arguably the most impactful piece of software Apple ever released.

And just like a "samurai warrior" felled by a "worthy opponent," iTunes will now be broken down into three smaller samurais that perform essentially the same function but separately.

The Good, the Bad, and the U2 Album Nobody Wanted
As an online market, iTunes might seem unremarkable today. But back in the Wild West days of the MP3, this digital music platform was the innovation that gave Apple the edge over its competitors.