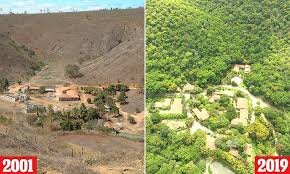 When Salgado returned from a traumatic trip covering the Rwandan genocide in 1994, he was shocked to find his family's former cattle ranch in a state of natural degradation.

'The land was as sick as I was – everything was destroyed,' the famed photographer said at a meeting on climate change in Paris in 2015. 'Only about 0.5% of the land was covered in trees.'

Salgado, now 75, remembered the farm he grew up on as a lush and lively sub-tropical rainforest, but the area had suffered from rampant deforestation and uncontrolled exploitation of natural resources.

His wife had the idea to replant the forest.

'It was so natural, instinctive. The land was so degraded, so horrible. What a bad gift! Why not plant?' Lélia told Smithsonian Magazine in 2015.

So the award-winning photographer known for his black-and-white depictions of human suffering around the world turned his hand to healing the land of his youth.

In 1998, the couple founded the Instituto Terra, an environmental organization dedicated to the sustainable development of the valley.

They elicited the support of Vale, one of the world's biggest mining companies and reforestation experts, which donated 100,000 seedlings from its nursery and helped rejuvenate the 'dead soil'.