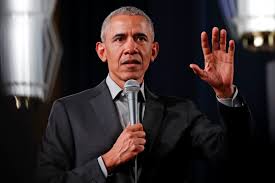 "Some of you may be aware our gun laws in the United States don't make much sense. Anybody can buy any weapon any time," said Obama - to which the audience erupted in applause, seemingly over Americans' access to guns.

This is of course false, as not "anybody" can buy a gun "any time." Federal law restricts the purchase of a handgun through a licensed dealer to those who are 18 or older (18 in most states for long guns), while convicted felons can't legally own firearms at all.

After the audience died down, Obama continued: "...without much if any regulation, they can buy it over the Internet, they can buy machine guns."

And while guns can be purchased over the internet, Obama lied again when he claimed that there's 'little regulation' to buy online - when in fact a Federal Firearms License (FFL) holder must be involved in interstate sales, and that people can buy "machine guns."