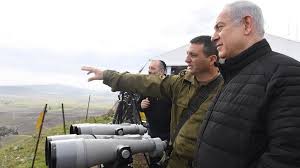 The Netanyahu photo immediately generated controversy, given the US president had written the word "Nice" beside an arrow pointing to the Golan, which appeared as part of Israel. The prime minister boasted this was one of the early "updated" versions which the president had autographed.

Trump's son-in-law and senior adviser Jared Kushner gifted him the map while touring the region ahead of a US-sponsored economic peace summit set to be held in Bahrain in late June, during which Trump's so-called "Deal of the Century" plan will be unveiled, designed to achieve economic stability for the Palestinians as part of a peace plan.

The Palestinians under President Mahmoud Abbas have declared their intent to boycott the summit, saying they weren't even consulted and don't agree with what's on the agenda. And crucially, China and Russia will also stay away in solidarity with the Palestinian side, but also presumably to flex their muscles in the Middle East.

"I know we have for sure... we updated the maps," a State Department spokesperson said later in the day when pressed on if the US has formally changed the maps.