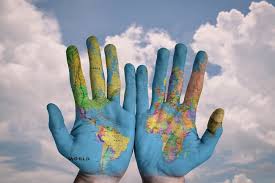 The status quo measures wealth with "money," but "money" is not what's valuable. "Money" (in quotes because the global economy operates on intrinsically valueless fiat currencies being "money") is wealth only if it can purchase what's actually valuable.

As the world slides into an era of scarcities, what will matter more than "money" are the essentials of survival: fresh water, energy, soil and the output of those three, food. The ability to secure these resources will separate nations that fail and those that survive.

In a world of abundance, it's assumed every essential resource can be bought on the open market. Surpluses are placed on the market and anyone with "money" can buy the surplus.

Things work differently in scarcity: "money" buys zip, zero, nada because nobody with what's scarce can afford to give it away for "money" which can no longer secure what's scarce.

Parachute into a desert with gold, dollars, euros, yen and yuan, and since there's nothing to buy, all your money is worthless. Once you're thirsting to death, you'd give all your money away for a liter of fresh water. But why would anyone who needs that liter for their on survival trade it for useless "money"?

Imagine the longevity of a regime which sold the nation's food while its populace went hungry. Not very long once the truth comes out.

Having resources is only one component: consumption is the other half of the picture. Having 4 million barrels a day of oil (MBPD) is nice if you're only using 3 MBPD, but if you're consuming 8 MBPD, you still need to import 4 MBPD.

Water and soil are not tradable commodities. Nations which share water resources (rivers and watersheds) have to negotiate (or fight wars over) the division of that scarce resource, but as a generality, fresh water and fertile soil can't be bought and sold like grain and oil.

The number of nations with surplus energy and food to export is small. As I noted in Superbugs and the Ultimate Economic Weapon: Food, there are contingencies in food production which could quickly erase surpluses and exports and trigger widespread shortages that have the potential to unleash social unrest.

Energy exports are also a natural economic weapon with which to reward needy friends or punish desperate enemies (no oil or natural gas for you!).

But energy exports are also contingent: natural gas and oil pipelines can be blown up by non-state players, shipping chokepoints can be closed or mined, regimes can change overnight and so on.