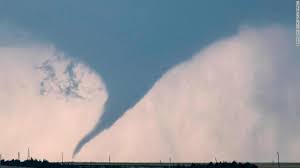 A line of tornadoes crossed Indiana and Ohio last night, so close together that one crossed through the path of another. This morning, 5 million are without power. Towns outside of Dayton, Ohio were the hardest hit. The damage is nothing short of catastrophic.

Just before midnight, not 40 minutes after that tornado cut through, the weather service tweeted that another one was traversing its path, churning up debris densely enough to be seen on radar…

…In Indiana, at least 75 homes were damaged in Pendleton and the nearby community of Huntsville, said Madison County Emergency Management spokesman Todd Harmeson. No serious injuries were reported in the area or other parts of the state.

Many of the places where people took shelter were hit hard by the tornadoes and officials are going door to door looking for people who may be trapped in the rubble. (Here's how to survive a tornado if you're at home, in your car, or out and about.)

This tweet shows one of the massive tornadoes approaching in the distance.

Utilities are out for the immediate future.

At least 5 million people are without power during the current heat wave and Dayton Power and Light said residents should expect a "multi-day restoration effort." And because the power is out to the water plants and pumping stations, Dayton residents are urged to conserve water. (Here's how to survive a hot-weather power outage.)

What You Need to Know About Health Hazards After a Flood

California Drought, How To Party On The Titanic

Thousands of household wells go dry amid California drought: 'Without water, you're nothing*

The Southwest's Most Important River Is Drying Up

THREE volcanoes are erupting simultaneously along Alaska's 'Ring of Fire'...