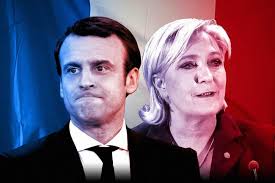 Macron's En Marche (Republic on The Move) will have just 22.5% of the vote compared with 24% for Le Pen, according to pollsters Ifop. With Macron and Le Pen neck and neck ahead of the elections, the outcome will be a humiliation for the liberal politician who said before the elections that everything less than 1st place would be a defeat.

Rounding out the The Greens were third with 13%, the conservative Republicans got 8%, while the implosion of the Socialists continues, coming in dead last with just 6.5% of the vote.

Macron's default took place even as turnout was up around 10% points from 2014, however the increase was particularly marked in regions where Le Pen's party has gained ground in the past years. In other words, as establishment apathy gets entrenched, the populist vote is increasingly demanding to be heard.

It gets worse: to the shock of globalists and statists everywhere, this is Le Pen's second straight victory in the EU vote. In 2014 she beat the conservatives by 4 percentage points with Macron's Socialist predecessor Francois Hollande trailing in third.

As Bloomberg notes, the result is a setback for the 41-year-old Macron who played a more prominent role in the campaign than any other European leader as he sought to mobilize voters.