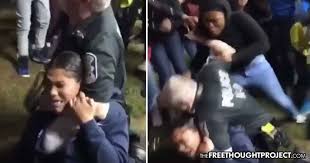 After children watched a police officer choke out a small girl, they stepped in to stop him and all hell broke loose.

Montgomery County, PA — Shocking cellphone video from a county fair in Pennsylvania captured the moment multiple teenagers attacked police officers in an apparent attempt to stop one of them from choking a teenage girl. Many of those who watched the video are saying that it shows what happens when youths lose trust in police.

According to the Norristown Police Department, officers were responding to reports of a fight at the the St. Francis Spring Carnival in Norristown.

"The crowd ignored all orders by the police and continued to fight. Officers reported being kicked, shoved, and punched and were forced to call for assistance from several surrounding departments," Norristown Chief of Police Mark Talbot said.

However, as the video shows, one of the officers appeared to be choking a child who was a third of his size. This choke hold appeared to anger the crowd of children who then swarmed the officer to get him to stop.

Virginia trooper is fired after telling black motorist: 'You're going to get your a** whoope